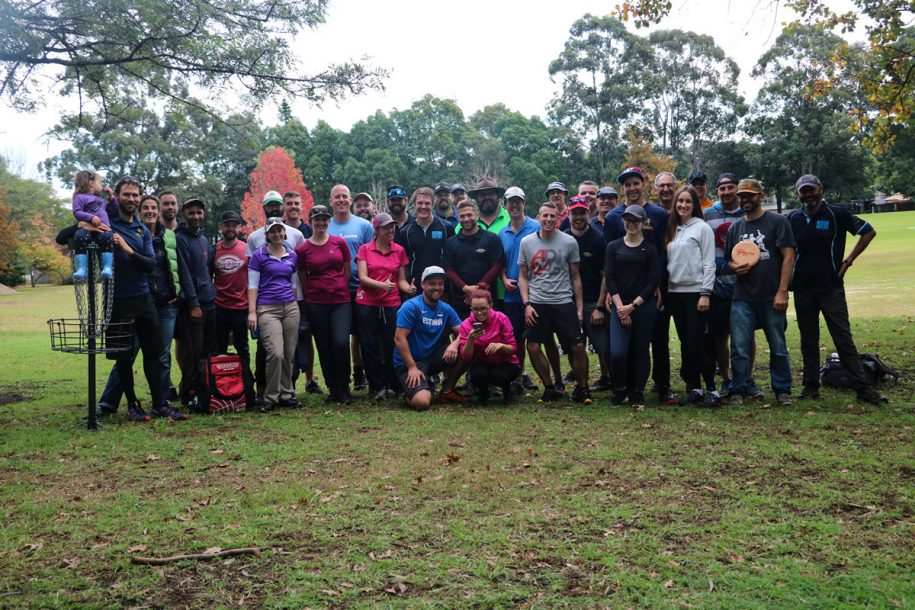 The 5th Annual “Up on Juan” event was held on Sunday 11th June, 2017, at Upjohn Park in the Western Sydney suburb of Rydalmere.

According to local legend, this event was started as a bit of a joke towards the Victorians, or Mexicans, as they’re sometimes referred to by New South Welshman because they are “south of the border”.  The tournament’s name is derived by taking the name “John” from Upjohn Park and translating it to its Mexican form “Juan”. Since New South Wales is geographically above (up on) Victoria, it combines to create the “Up on Juan” name.

The tournament is typically held the week before the Victorian Open as a warm up event but this year’s tournament was held much later given the newly reformed committee for the Sydney Disc Golf Club.

The course itself is a 9-hole temporary course with alternate tee locations to make it 18-holes total. 5-Up on Juan is a 36-hole format played with a morning round, lunch break, then an afternoon round. Upjohn Park was a former golf course that was purchased by Upjohn Pharmaceutical who subsequently transferred 25 acres of land to the local council. It’s a picturesque reserve, well-maintained by the council, has great facilities, toilet blocks, barbecues, and footpaths throughout, making it an ideal location for a permanent disc golf course. Especially considering that it was formerly a (ball) golf course, disc golf’s sister sport in terminology, rules and etiquette.

We crossed paths with locals who were walking, running, picnicking or otherwise enjoying the parklands. Everyone was friendly and intrigued by what we were doing with our flying discs and funny baskets. As is typical for disc golfers, we were happy to explain the sport and had we not been in a tournament, we would normally offer the passers-by to have a throw and try it out! It was great how welcoming the locals were and the club is ecstatic that the event integrated seamlessly with a typical Sunday at the park.

The setup for “Up on Juan” plays as your typical parkland course, utilising the existing trees, manicured landscape, and unforgiving bush alongside most holes. Errant throws into the lantana and bush alongside certain holes or baskets meant losing a disc and a stroke for several of us or made for a near-impossible upshot if you were lucky enough to find your disc.

PDGA specifications for course design state: “course setups longer than 6,000 feet (1,800 m) are primarily for better players at the Blue or Gold level, and for tournament play”. At 2050 metres, this year’s “Up on Juan” tournament made for a healthy walk and a challenging round for players of all skill levels.

The course favours accuracy over forehands, backhands, lefties, or righties. There are a few holes that favour big arms on the tee, but overall, this lengthy par 60 is more about having accurate drives and landing in the best locations to make upshots as easy as possible.

The scores were indicative of how challenging the course was. Todd Nowak won the event shooting just -3 for the tournament. Only 2 other players were below par, in any division. With all of the trees and bush throughout Upjohn Park, you need to make your drives, or “miss” in the right spot, otherwise your chances of par or birdie evaporate.

5-Up on Juan enjoyed a maxed out registration of 36 players this year, or 4 per hole for the shotgun start, seeing 50% growth from 4-Up on Juan in 2016 and making it the biggest field yet for the event. You don’t want to miss the next one when it comes around!

Thank you to those people for volunteering and making this whole event a reality (In no specific order). Great job guys!