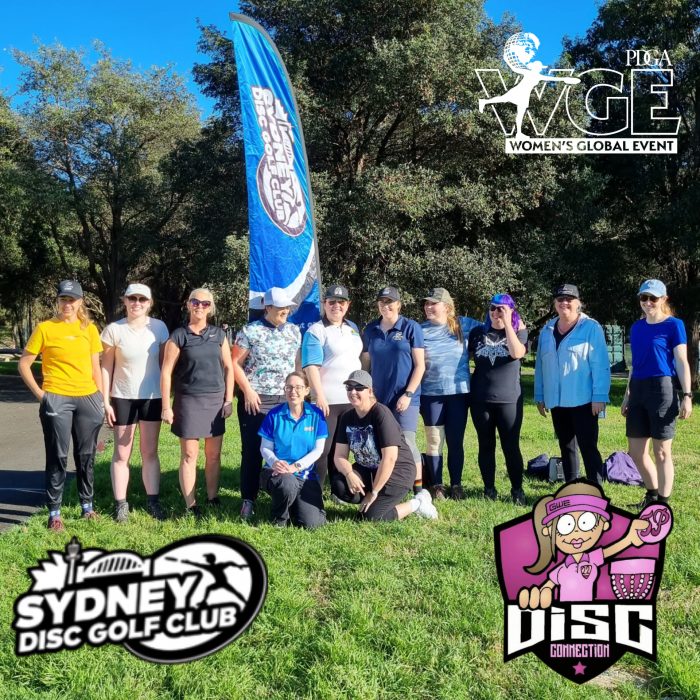 The Women’s Global Event (or WGE) is a virtual tournament organised by the PDGA where women from all around the world play two rounds of disc golf at their local participating WGE tournament. Scores from these two rounds are then rated by the PDGA and these ratings totaled and averaged to determine the player’s “Global Score.” Players are then ranked globally in each division – see results here.

In Sydney we had 12 wonderful ladies compete at the Armory in two rounds of 18 holes in beautiful conditions. We also had 45 male players competing and showing support for women’s disc golf.

Round 1 kicked off on Saturday morning under cloudless skies and almost no wind. The winds increased gradually throughout the day but didn’t appear to affect scores too greatly.

It was an honour to have two of Australia’s top female players playing at WGE Sydney – Cassie Sweetten in FPO and Toosje Frequin in FP40. Cassie started with a 864 rated first round but then smashed it in the second round with a 936 rated 2 under par. Only 2 other players out of a field of 57 were able to better this! Cassie also grabbed the CTP prize on hole 14, taking home a Shakti mat as a reward. Toosje started with a 874 rated first round and then a 833 rated second round. At the end of the event, Cassie finished 53rd globally in FPO and Toosje 24th in FP40. Well done ladies!

Alex Williams and Helena Walker battled it out in FA1. Alex started with a strong 884 rated first round to have the best score of all the ladies at the midway point and a 8-shot lead over Helena. However, Alex struggled in the second round allowing Helena back to within 4 shots after 36 holes.

4 ladies started in the FA4 field and after the first round it was a tie between newcomer Kirsty Murray and Kelly Wickham, both with a respectable 751-rated round. In the second round, Kirsty was able to hit repeat and smash out another 751-rated round. This was enough to take the win from Kelly by 5 shots and also finish in 47th place globally. Kirsty was also awarded the Encouragement Award sponsored by Jessica McClung.

Louise Glover finished in 3rd and took home the Most Improved award sponsored by Cassie Sweetten.

7 male open players for this event including 2 newcomers – Mario and Olatundji. Jade Brady was on fire for round 1 finishing with a 1049 rated 13 under. For his efforts, Jade took home a special collectors card pack sponsored by Brixton Disc Golf for the highest rated round of the tournament.

Everybody thought it was all over at the half way mark with his nearest contender, Austin D’Allesandro, trailing by 8 shots. However, Jade couldn’t back up for round 2 and Austin had the hot round with a 1018 rated 10 under. This was enough to win the day by 1 stroke over Jade. 3rd place, Dan Frost was 12 shots off the pace.

A smaller than usual field for MA1 with only 3 starters. Tanner Sleep managed an ace on the tricky hole 2 but this wasn’t enough to take the round 1 honours! Kam Abratanski shot a 926 rated 1 under to take the first round lead by 3 over Liam Aungle. In the second round, the boys all took their foot of the accelerator and Kam cruised home for an easy win over Liam Aungle by 6 strokes.

4 players in MA40. Mat Wallis shot a 926 rated 1 under in the first round to take a 2 shot lead over Tanga Waetford. In the second round, Tanga came through for a 2 shot win after a 936 rated 2 under.

The ever-popular MA50 division had 7 starters. Paul Comninos came out strong with a 946 rated first round to lead Nick Hall by 4 strokes. Paul backed it up with a 936 rated second round to smash the competition and win by 12 strokes over Nick. Paul’s two consistent rounds had him finish 3rd overall for the entire field.

MA2, the most popular division of the field with 12 players and the tightest competition. Matt Ellis shot a 926 rated 1 under to lead round 1 by 2 shots over Brock Brinkworth. In the second round it was Stephen Clarke’s turn for the hot round with a 936 rated 2 under while Matt Ellis could only manage a 2 over. This was enough to give Stephen the win by 1 shot over Matt and Liam Brunelli-Brondex another 2 shots back in third.

MA3 had 10 players and Broden Sherratt came out firing with a 905-rated first round, taking a 3 shot lead over Mitchell Bradac. In the second round, Broden continued the domination with a 895 rated round, finishing at +3, 7 shots ahead of Jack Tonzing and 1 shot further back to Mitchell Bradac and Tim Wright.

Only 2 players in novice this event. Josh Godbee finished round 1 with a 6 shot lead over Jack Gannon. Jack fought back in the second round but not enough to take the win – Josh winning MA4 by 3 shots.

Finally, a special mention to our event sponsors. Without their help and support, the event wouldn’t have been as big as it was. A special mention also to Wade O’Shannessy from Brisbane who helped out greatly with bringing in sponsors for this event.

Also a huge shout out to our newest TD, Lisa Wallis, along with members of SDGC who organised the event and set up the course.